It’s a city that certainly gave us a lot to think about whilst spending time there during the Vietnamese New Year, or Tết as it is known locally.

We only spent two nights here but we managed to cram quite a lot in. It was fortunate and unfortunate at the same time that we arrived just before the New Year.

We did see a great show and lots of fireworks, but it also meant many places closed earlier than usual to start their own celebrations. If you’re looking to go around this time of year (January/February time), then be aware of this.

New Year in Vietnam was crazy!

Our hotel, Yen Trang 2, was pleasant. Located just off the popular Phạm Ngũ Lão street, we were able to get a taxi from the train station. With a little help from Google maps, we found the hotel relatively easily. It was clean, and the staff were friendly.

It was also close to the other attractions we visited below! We didn’t use public transport at all whilst staying here, which was great. Vietnamese sleeper trains are great for transporting between cities but it’s always better if you are close to all the attractions in a city!

If you’re trying to visit Vietnam on a budget, then book your accommodation in advance. There are plenty of places to stay in Ho Chi Minh City so you’ll have choice of which district and type  of hotel you want.

We paid around 800,000VND which is roughly £27, for two nights. Considering the location, for two people we thought this was reasonable. We used booking.com to find the hotel, which meant we could get the free travel guide.

Download the map of the local area using WiFi so that you don’t get lost in a strange city! Of course, you could always use a physical map but…..come on it’s 2017 😉 There are plenty of things to do in Vietnam and Ho Chi Minh City is a great place to start!

One thing we didn’t do enough of was shop for souvenirs and gifts. There are plenty of shops and stalls to try out though – definitely visit Bến Thành Market! There are hundreds of stalls that sell everything, from food to little trinkets to clothes. Don’t forget to haggle in here! We did buy a gorgeous red lantern from here but it was hard work! We really cracked the ‘I’m not really bothered about this item’ face!

this flower market was cute

Along Phạm Ngũ Lão Street, there are lots of shops. A few sold clothes and bags, but many sold items like at the market. As we didn’t have the space for the Vietnamese hat I so badly wanted, we settled for a miniature version of three hats hanging together. Kev also bought some sunglasses in one of these shops, and all of the prices were fair.

We had been in Vietnam for around a week, visiting Hanoi and Nha Trang before we arrived in Hồ Chí Minh. We felt like we were getting used to the French feel of the country. However, we weren’t prepared for the buildings to look THAT French! It really felt like we were on a European trip, rather than a South East Asian one. We wandered round the city, enjoying the Notre Dame Cathedral in particular!

such beautiful architecture in the city!

READ MORE: 9 Awesome Things To Do In Vietnam On A Budget

A poignant part of our trip was when we visited the War Remnants Museum. Before arriving in Vietnam, we really had a limited knowledge about the Vietnam War. After visiting the Hỏa Lò Prison Museum in Hanoi, we became a little more interested in the history of the country.

We thought Hồ Chí Minh was the perfect place to learn some more. If you read the reviews, everyone talks about it being awful and warns you to have a thick skin to read some of the information. Being totally honest, we’d agree. Some parts were quite graphic and distressing, so do be prepared. Unfortunately it’s a true representation of what happened so we would still recommend taking a look.

the museum was pretty interesting

Outside the museum, there are also lots of different aircraft and weapons displayed which are incredible to see.

We could talk about incredible Vietnamese food all day! But that would be boring so here’s a quick insight of what you’ll find in Hồ Chí Minh.

Bánh mì- the sandwich of all sandwiches! As Westerners, living in Asia for a while made us miss bread A LOT. Luckily, Vietnam had us covered. A baguette filled with delicious meat with different sauces and even cheese sometimes, you’ll definitely have one or two or seven of these if you’re sticking with local food!

Cheap and quick, they’re made to order at little stalls. It’s a little bit like a Vietnamese version of Subway but better! Our favourite stall was set up by a lady just outside our hotel so breakfast was always a winner. 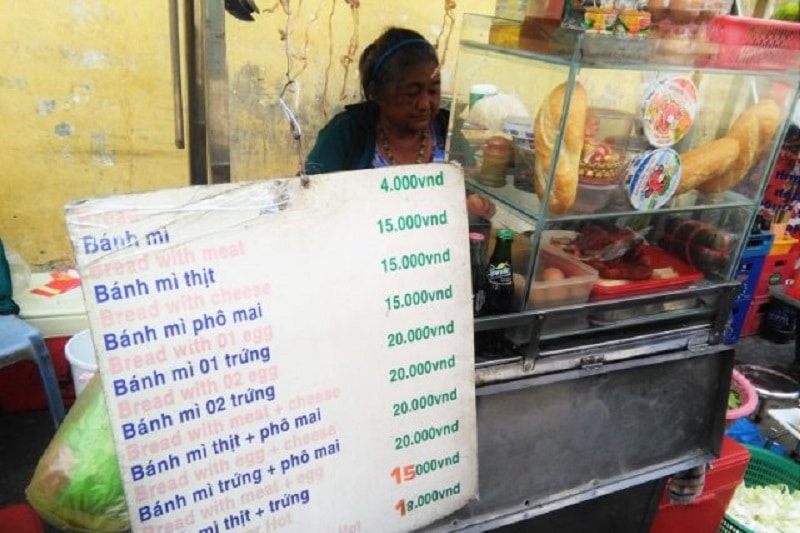 give me alllll the bread

Phở – noodle soup with meat, veg and lots of interesting flavours! We went to a cheap little restaurant near the Notre Dame Cathedral and had the beef version – you can’t go wrong!

Spring rolls – We found that the fried spring rolls in Hanoi were better than the fresh ones down south, but this could just have been a restaurant difference. The rice paper wrappings were a bit chewy for our liking but the fillings were still tasty.

Cheap beer is always available in Vietnam, but we decided to splash out a bit and visit the Bitexco Tower to have a drink in it’s sky bar.

You can go to the restaurant and pay extortionate amounts for your dinner, or you can go to the 52nd floor and just enjoy the views whilst sipping on a cocktail or beer. We chose the second option and enjoyed our time looking out into the city and finding the best rooftop swimming pools we could see!

Vietnam is a wonderful country but we weren’t prepared for how poorly run Sài Gòn Zoo was. Having been disappointed with Beijing Zoo, maybe we should have been a bit wary, especially as the entrance fee was ridiculously low – 50,000VND for adults (around £1.50).

The animals were not looked after well at all – the elephants in particular appeared to be extremely sad and potentially suffering some sort of mental health issue. One was chained up and was repeatedly banging his head on the wall.

We decided not to stay any longer after two monkeys escaped their enclosure! They slid through the bars and one ran up a nearby tree, whilst the other one stayed on the barrier just looking around. They didn’t seem harmful but I wouldn’t be happy if I had young children around.

You’ll more than likely be underwhelmed and a little bit sad if you visit here – go and buy another two bánh mì instead!

We had a brilliant time in Hồ Chí Minh City – the weather in early February was beautiful and we saw some amazing architecture. Definitely don’t skip this city!

Have you been to Hồ Chí Minh? Did you enjoy anything that we missed? Let us know in the comments below!